I’ve been running all over the internet like a lunatic, whoring myself out because I have a new release from Ylva Publishing. And, for some reason, awesome people like Blythe Rippon said yes when I asked if they would host a guest blog for me.

Incidentally, Blythe and I also host this awesome podcast called Badass Women Save Themselves. Every few weeks, we get together to discuss the feminist (or not) nature of our favorite TV shows, movies, music, and even books. Basically, if it’s covered by the umbrella of “pop culture,” then it’s fair game. Be forewarned, we swear. Sometimes a little. Sometimes a lot. I do it because I like the way a good swear word feels in my mouth. Blythe’s use of swear words varies in direct relationship to how much alcohol she’s consumed. You should totally check it out. What we lack in journalist polish, we make up for in raw enthusiasm. 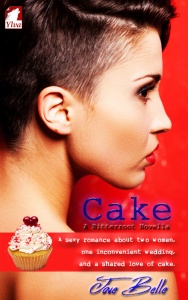 But that has nothing to do with Cake, my new novella that is available TODAY from Ylva Publishing.  (Insert party noises here!)

Cake is a bit of a departure from my previous work. First, it’s my first release with Ylva Publishing. Second, it’s also my first release of a single novella length work. And third, this is the first project that my wife and I have designated a charity for. That means we’ll donate ten percent of the royalties to the United Nations World Food Program. Check them out. They do good work.

So, if you have a few minutes and a few dollars ($2.99), swing by and check out Cake. I think you’ll like it. Because, really, who doesn’t like cake?

A sexy romance about two women, one inconvenient wedding, and a shared love of cake.

Kelly and Elana’s relationship is a recipe for disaster. First, they meet at a wedding, and that never works. Second, Kelly’s older brother is marrying Elana’s ex-lover. And third, Elana is still painfully, undeniably in love with said ex.

When it comes to other people’s lives, Elana Verdad is an expert. As a licensed psychologist and life coach, she helps people overcome obstacles. Her own life, on the other hand, is a disaster. Her lover left her for a man, so she drove over his mailbox accidentally on purpose. Now, not only did the judge take away her driver’s license, he also assigned her to community service at the local women’s prison. In what may be her worst idea ever, Elana decides to crash their wedding.

Kelly Miller may not understand her brother’s rush to marry his girlfriend, but when he asks her to bake his wedding cake, it’s not as if she can refuse. She’s in the catering business after all. At the wedding, she meets a beautiful, complicated, and seriously damaged woman. Although Kelly knows it’s crazy, she’s drawn to her nonetheless.

Despite the reasons they shouldn’t be together, there’s still an undeniable something between them. All they need is a chance to enjoy their slice of the cake.

…has been a part of the lesbian fiction publishing community for almost a decade.

In addition to being an author and editor, Jove is a founding member and co-admin of the popular lesbian fiction blog Women and Words. She also works as a consultant with Book Enthusiast Promotions, an online marketing company for fiction authors, and as Operations Director US for Ylva Publishing.