Skip to content
My wife asked me last night, after putting up with my week-long binge watch of The 100, why I like post-apocalypse stories. Because the fact is, I love them. Might even be my favorite genre. So, I’ve been trying to answer her question, and I think it has to do with the way the apocalypse brings about not only the death of almost all people, but also, often, sexism and homophobia. Think about it–there are tons of problems in Panem, but sexism isn’t really one of them. Gender dynamics on Battlestar Galactica are pretty equal. And when the 100 prisoners encounter grounders, gender doesn’t determine power. Likewise sexuality–I love that The 100 doesn’t make a big deal about the genders of who’s sleeping with whom. The apocalypse equalizes these things–it creates a world where there’s not vestiges of a patriarchy that’s been overcome, but a world that seems to have always been more equal.
Okay, so, this might be why I live the genre. Why do I love THIS show? Three words. Clarke. Clarke. Clarke. She’s easily one of my favorite characters ever. She’s got the fun stuff, like looks, brilliance, and integrity. She’s got the flaws–uptight, a little self-righteous, and there’s the whole Commander of Death thing (which, by the way, the show will be missing something if it doesn’t do more with this). And she likes boys and girls, which is just great.

I have so much to say about this show. Let’s do this in parts.
The Rise of Chancellor Pike, or, Trumpism on your Television
In terms of plot arc, the rise of Pike makes perfect sense and is completely infuriating. Kind of like the rise of Donald Trump in US politics. Recognizing the parallels almost makes me able to stomach this frustrating storyline (nothing makes me able to stomach Trumpism). Think about it. Pike basically gets the wall Trump’s been droning on and on about. They both spout despotic xenophobia and racism, preferring violence to alliance. And, both have been able to summon formerly-reasonable people to their cause. I’d been so irritated at what the writers did to Bellamy until I started reading his support for Pike through Trumpism. Bellamy, and the others who fall in with Pike, want a single-minded dictator to lead them–someone who will keep them safe from anyone they’re afraid of. Basically, Pike’s supporters are authoritarians. Just like Trump supporters (for more on authoritarians, read this excellent and terrifying article: http://www.vox.com/2016/3/1/11127424/trump-authoritarianism). That’s why they’re all so terrifying. They are ruled by fear, not logic or compassion.

It remains to be seen whether Bellamy changes his mind–he’s showing some signs that he might (and even if he does, It might be too late). The whole thing makes me think about the problems with democracy, and the value of treason, and what actions are necessary for the greater good–for survival. Just like Battlestar Galactica, The 100 makes viewers root against a democratically elected leader, and cheer on someone who would overthrow him, through violence if need be. Another reason I love the genre of post-apocalypse–it flips the groups and ideologies I’m used to identifying with, and makes me identify with things that are commonly framed as “enemy” or “evil.” I’ll be keeping my fingers crossed that Kane survives (he’s grown on me, which I never thought I’d say after he shock-lashed Abby) and someone murders Pike, before he starts a war.
Lady Leaders
I love a show where almost all the leaders are women. I adored Anya, even while I wanted Clarke to best her. And Abby–where do I even start with Abby? With those adorable smile lines, and that medical brilliance, and that impossible but so, so important parenting decision to trust your daughter to grow up and lead. The show made some great choices about Clarke’s rise to leadership. I got super nervous early in season 2 that the adults would come in with their bureaucracy and ruin everything. They tried to, briefly, but quickly realized that the kids who have lived in this world for a while might be better equipped to make major decisions.
In particular, I loved watching Abby give the reins to Clarke, especially because it wasn’t a smooth transition. They fought for power a bit, and one of Clarke’s first major decisions was to let tons of people die in a missile attack she could have easily warned them about (seriously, Clarke, you’re the brilliant strategist–why couldn’t you have had the clans stage a fight and disperse, and reconvene somewhere else later???). 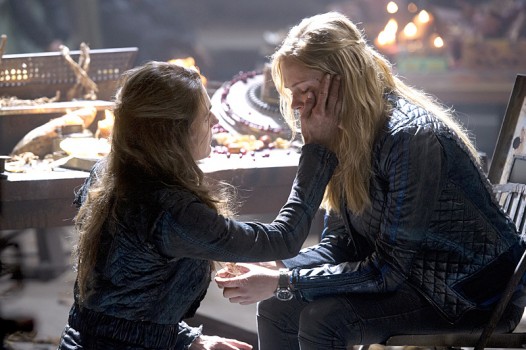 And the thing that fascinates me most is how we define “leader” here. How is it that Abby’s the chancellor but Clarke’s their leader? I haven’t really figure this out yet. Is it that Abby’s the political leader, and Clarke’s the military one? Maybe–but that might not work because Clarke is also the diplomat. Is the show arguing that real leaders operate outside of recognizable power structures, because they’re not bound by the same rules/laws? I haven’t decided, but am having a great time pondering it.
Which brings us to Lexa, if we’re talking about lady leaders.
Clarke, Lexa, and Forbidden Love
God, those two. Such well-drawn characters, such hot actors, such chemistry. I love that the show took the forbidden nature of lesbian relationships and moved it from the terrain of sexuality to the terrain of cross-cultural conflict. Initially, Clarke hesitates because she’s still dealing with Finn’s death, but what really keeps them apart is the politics and optics of their relationship. Their first duty has to be to their people, which makes the longing looks they give each other that much more deliciously achy. They finally say “screw everyone else” and sleep together, and Lexa immediately dies.

And then the internet blew up. It went bananas, in a cool but perhaps slightly overblown way.
I’m just as heartbroken by Lexa’s death as any other lesbikru. So let’s say that Lexa had to leave the show, because the actor had other commitments, and you’re the writer. What do you do?
Would audiences have preferred that they never slept together? I wouldn’t. The writers did a great job foreshadowing her death. Any Freudian psychoanalyst would say that Lexa had a death wish–Clarke even chastises her for talking about her death so often. Should they have slept together sooner, so there was more time between sex and death? I’m not sure what that would have changed. We’d be just as heartbroken. And we would have missed the slow burn build-up.
My heart hurts for Lexa’s death, but I’m sticking with the show. Partly, I want to see how the writers respond to the huge backlash about Lexa’s death.
But, I’m nervous about this AI bug. I hope the show doesn’t imply that Clarke fell in love with a machine, or that the next commander is basically Lexa in a different body.
And I’m resigned to the fact that, it they want Clarke to actually be bi, she’ll have to be with a guy next, since she’s slept with two women since Finn. And frankly, girlfriend probably needs to stick with one-night stands for a while. If she moves on from Lexa’s death any time soon, we’ll all be pissed. Also, fans have been drawing tons of parallels between Lexa’s death and Tara’s from Buffy–god, I hope the 100 writers do better for Clarke than Kennedy was for Willow.
There’s so much more to say. About Raven, Octavia, Jasper, Indra, Lincoln. But this is already a ridiculously long blog post–if you’re still reading, thanks! Maybe I’ll blog about the show again. I can’t  stop thinking about it, so chances are I’ll just have to write more. In the meantime…
May we meet again.